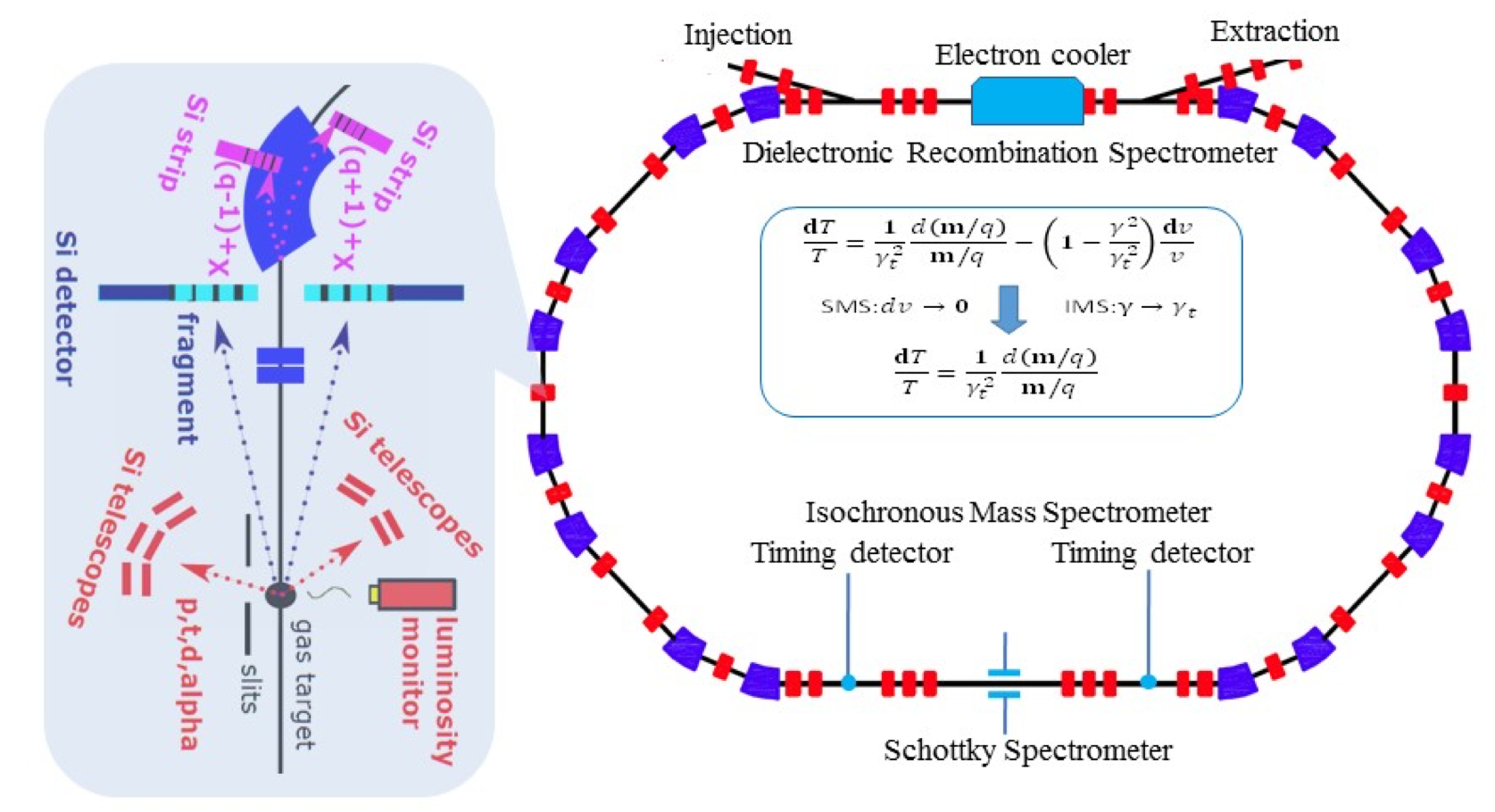 Diagrammatic sketches of the Dielectronic Recombination Spectrometer, Isochronous Mass Spectrometer, Schottky Spectrometer, and Setup for In-ring Nuclear Reactions. The formulas shown in the inset in the right figure are the principle for nuclear mass measurements.

The Dielectronic Recombination Spectrometer: In the electron cooler, the ion beam stored is merged with the electron beam. If the ion Aq+captures a free electron with well-defined energy provided by the electron cooler and a bound electron is excited simultaneously, the so-called dielectronic recombination phenomenon occurs. This is a resonance process. The electron beam usually has a longitudinal temperature of less than 1.0 meV. Interacting with the cooling electrons results in a very narrow momentum spread for the ion beam of the order of 10–5. If detuning the electron energy from the cooling point, the resonance energies can be measured by recording recombination rate as a function of the electron energy. In the experiment, recombined ions are separated from the primary beam in the dipole magnet located downstream with respect to the interaction zone, and then detected by the particle detectors installed in the outer side of the ring. We can deduce the nuclear charge radius of the stored ion from the resonance spectrum. This technique is well established at the storage rings at GSI and IMP. We will design and build the Dielectronic Recombination Spectrometer at the Spectrometer Ring, and measure systematically the nuclear charge radii for unstable nuclei after their survival for the electron cooling process. 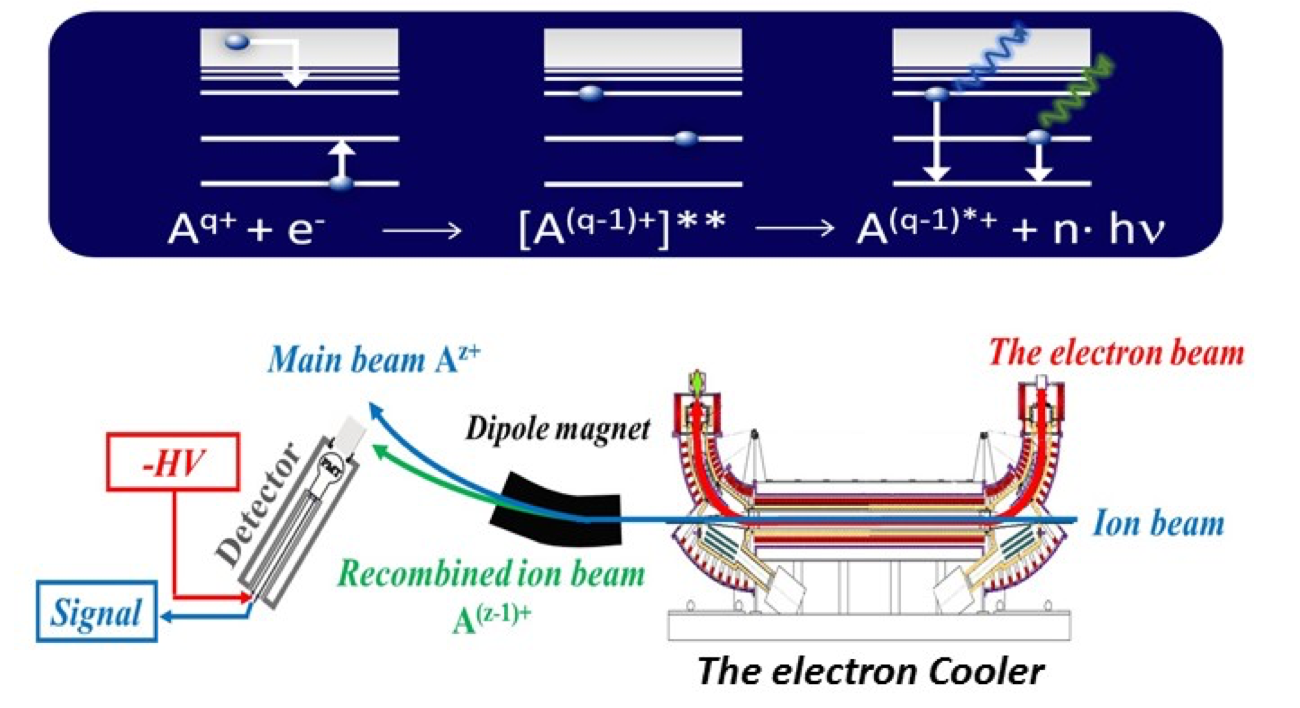 Setup for In-ring Nuclear Reactions: Storage-ring based nuclear reactions open new opportunities to measure cross sections of specific reaction channels and to study the resonance properties of excited states in nuclides, which could not be addressed or are difficult to be addressed by conventional methods. The experiments of in-ring nuclear reactions benefit from the unique conditions of extremely low background in high vacuum, high luminosity using efficiently circulating ions, and high-resolution measurement associated with very thin target materials. A position-sensitive Si detector array will be constructed, which is coupled to a gas-jet target system, as shown in the Figure. The primary physics goal is to measure the cross sections of various nuclear reactions, for instance, the (p, γ), (α, p), (α, n), (α, γ), etc. The measured data is indispensable as inputs to simulate the nucleosynthesis processes in stellar environments. In addition, experiments of proton scattering or light particles scattering with low-momentum transfer in inverse kinematics will be carried out in order to measure the nucleon density distribution in neutron-rich nuclides, study the isospin dependence of the saturation density of nuclear matter, and provide unique information on the incompressibility of the incident nuclide.

The Isochronous Mass Spectrometer: A heavy-ion storage ring coupled to an in-flight separator has been proven to be a powerful tool for direct mass measurements of short-lived nuclides. The Isochronous Mass Spectrometry (IMS) has been well developed at GSI and IMP. The masses of the ions stored are determined from their revolution times measured using a timing detector in the IMS, and typical relative mass accuracy of 10−6to 10−7is achieved. Since a storage ring is a large-acceptance machine, it allows to store ions in a broad range of m/q values. This feature is essential for the IMS to measure masses of a few nuclides simultaneously. In the isochronous working mode of a storage ring, the revolution times of the stored ions should be independent of their velocity spread. However, the isochronous condition is fulfilled only in first order and in a small range of revolution times. We shall develop the advanced IMS with double timing detectors, by which the velocity of stored ion is measured to correct for the effect of the non-isochronicity. In order to measure the velocity of each ion stored, two timing detectors will be installed in the straight section of the Spectrometer Ring. This technique was already verified in principle at HIRFL. We will focus on mass measurements of short-lived nuclides in medium and heavy neutron-rich regions using the IMS with double timing detectors.

At the Spectrometer Ring, we mainly measure nuclear masses, half-lives, reaction cross sections, and exotic decay modes of highly charged ions. Of the most high-priority research program is to measure systematically nuclear masses in broad regions. The mass represents a basic characteristic of the nuclear system. The difference between the mass of a nucleus and the sum of the masses of its constituent free nucleons, i.e. the binding energy, provides direct information about the complex interactions that are responsible for the nuclear binding. There are many reasons for measuring the masses of nuclides in their ground or isomeric states. Perhaps the most fundamental questions in low-energy nuclear physics are closely related to nuclear masses, such as to locate the drip lines, predict the decay models of drip-line nuclides, recognize the disappearance of spherical magic numbers and appearance of new magic numbers, identify the onset of deformation along isotope chain and shape coexistence, etc. The development of nuclear models crucially depends on nuclear masses as experimental input, and such data are particularly valuable if obtained for long chains of isotopes or isotones. The Figure shown in the right presents an example to demonstrate the importance of nuclear mass measurements. Theories predicted that there might exist about 80 Sn isotopes, roughly for half of which their masses were measured experimentally. The various mass models reproduce well in general the experimental data, but the predictions deviate significantly in the regions far from the stability. The predicted two-neutron drip-line points, i.e. the nuclides with two-neutron separation energy equal to zero, differ by over 20 neutrons shown by the gray area in the Figure. It is therefore indispensable to measure the unknown masses to constrain and develop nuclear mass models. In addition, precision nuclear masses are of utmost importance to simulate various nuclear processes in staller environments, and in studies of fundamental symmetries and interactions. Taking the nuclear masses, half-lives, and reaction rates of astrophysical relevance as inputs, we will simulate the rapid neutron capture process and reproduce the observed element abundance distribution in the Universe. By connecting the simulated results to the core-collapse supernovae and two neutron star mergers, it would deepen our understanding of the origin of the heavy elements in the Universe and the dynamics of the explosive astrophysical events. 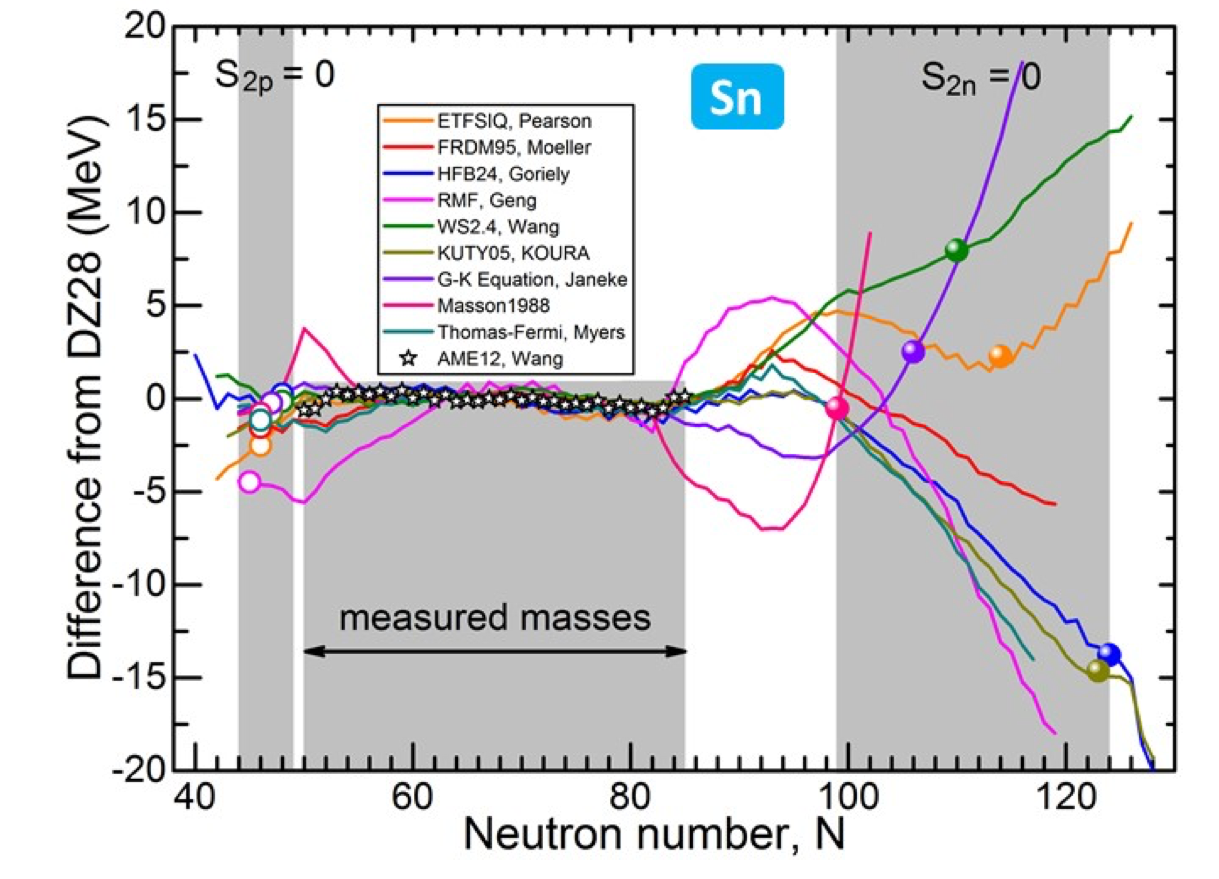 Comparison of experimental masses of Sn nuclides with the calculated results of various mass models, displayed relative to the calculated values of the DZ28 model(M. Wang, G. Audi, et al. Chin Phys C, 41: 030003, 2017). The black stars are experimental data, and the colored lines represent the predictions from the mass models indicated in the inset. The open and filled circles show the nuclides predicted theoretically to be unbound with respect to two-proton and two-neutron emission, respectively.