The Linac woks in two modes; the one is pulse mode either to inject energetic stable ions into the Booster Ring or to provide pulsed beams for the Test Storage Ring (TSR), and the other one is continuous wave mode to deliver intense low-energy heavy-ion beams for experiments. The TSR was built by the Max-Planck Institute for Nuclear Physics for studies of nuclear structure, reactions of astrophysical relevance, and atomic physics. The transfer of TSR from Germany to China is under negotiation, and hopefully we will soon come to an agreement that the TSR is moved to the Heavy Ion Research Facility in Lanzhou for several years of operation and then to HIAF. We will build a radioactive beam line to connect the TSR to the end of the Linac, and high-precision experiments will be conducted by the existing TSR collaboration.

Heavy-ion beams are exacted around the middle point of the Linac, and the beam energies can be adjusted finely around the Coulomb barriers of nuclear reactions. The low-energy intense beamswill enable producing very neutron-deficient nuclei using fusion reactions and particularly heavy and even super-heavy neutron-rich nuclei using multi-nucleon transfer reactions. The gas-filled recoil separator is an ideal tool to separate and study the nuclides produced in complete fusion reactions. The high angular acceptance and high transmission efficiency gas-filled recoil separator shown in the Figure will be built, mainly aiming to synthesize new elements and neutron-deficient isotopes. In addition, if a gas cell followed by an RFQ cooler and buncher is installed at the focal plane of the separator, pulsed high-quality, low-energy beams are available for nuclear mass spectroscopy and collinear laser spectroscopy.

The gas-filled recoil separator. The major components are indicated, and the detector arrays at the target position and focal plane are displayed in the insets.

Multi-nucleon transfer reactions are characterized by a large amount of energy dissipation, a large flow of nucleons between the interacting nuclides, and a noticeable time delay in the reaction. For an appropriate reaction system with beam energy around the Coulomb barrier, such as 238U+248Cm, the projectile evolves to the doubly magic nuclide 208Pb and transfers nucleons to the target, and consequently very neutron-rich heavy nuclides and even super-heavy nuclides are produced. The calculated cross sections for the production of transfermium nuclides in collisions of 238U with a 248Cm target are shown in the Figure. Presently, multi-nucleon transfer reactions employing very heavy projectile and target isotopes would be the most optimum method to produce neutron-rich heavy nuclides and practically the only way to assess neutron-rich super-heavy nuclides. However, opportunities always come with challenges together. The reaction products of multi-nucleon transfer reaction have very broad distributions in recoil energy, emitting angle, and charge state. It is a great challenge experimentally to separate efficiently the products of interest from the huge background. 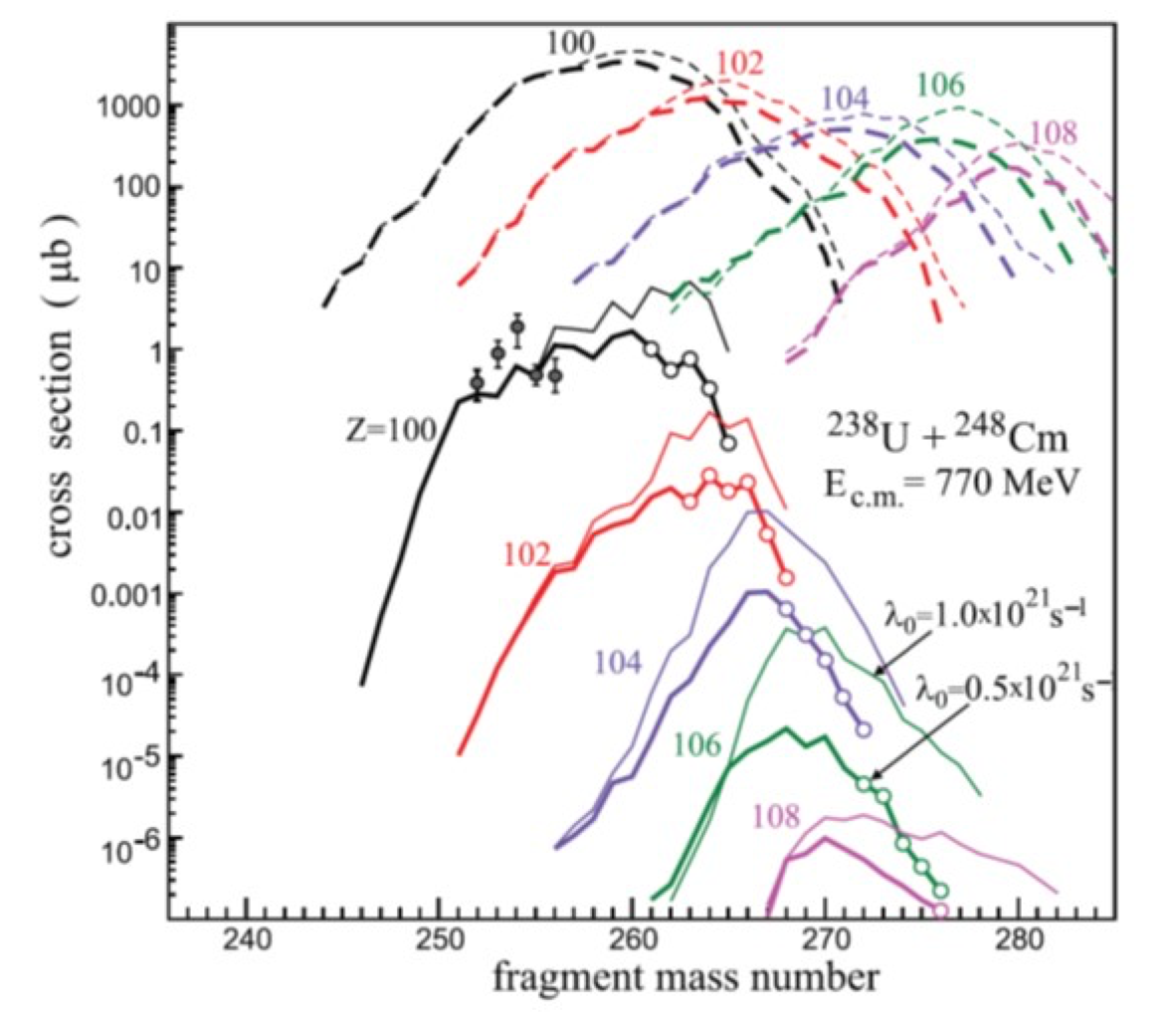 Calculated cross sections for the production of transfermium nuclides in collisions of 238U with a 248Cm target at Ec.m.= 770 MeV. Open circles indicate new isotopes of transfermium elements (with numbers near the curves). The dashed curves indicate the cross sections for the production of primary fragments. For details, see V. I. Zagrebaevand Walter Greiner, Phys Rev C,87, 034608 (2013).

With tremendous efforts, we have figured out conceptually a separator for separation and identification of multi-nucleon transfer reaction products, as shown in the Figure. The reaction products recoil into the gas cell filled with high purity Helium gas. Through interaction with the Helium atoms, the products are stopped and thermalized in the gas cell. Due to the very high ionization potential of Helium atom, the products would be in 1+charge state. All products are extracted out using the sextupole ion beam guide, and then cooled and bunched by the following RFQ device. The gas cell, sextupole ion beam guide, and RFQ cooler and buncher are placed at a 30 KV high voltage platform. At the exit of the RFQ cooler and buncher, the 1+ions have 30 keV energy, and therefore isobars of interest can be separated from the huge unwanted products by the mass analyzer. For the isotopic separation, we will use wither the laser spectrometry or multi-reflection time-of-flight mass spectrometry. The separator can provide pulsed low-energy, high-quality neutron-rich beams with mass and atomic numbers well identified, and then distribute the beams to a multi-reflection time-of-flight mass spectrometer, ion trap, decay spectrometer, and collinear laser spectrometer for various measurements. The key techniques are still under R&D but there are not insurmountable difficulties in principle.

The conceptual structure of the separator for separation and identification of multi-nucleon transfer reaction products.

At the low-energy station equipped with the two separators, we aim to synthesize new elements and isotopes, hunt for K-isomers, study nuclear decay properties, measure nuclear masses and lifetimes, and determine nuclear charge radii and moments. Of the most importance is to explore the super-heavy region in the nuclear chart, as shown in the Figure. New super-heavy elements might be synthesized using the actinide targets, for instance, using the 54Cr, 55Mn and 58Fe + 243Am reactions to produce the 119, 120, and 121 elements, respectively. Reactions of various projectiles bombarding thorium and uranium targets are employed to synthesize new super heavy isotopes bridging the decay chains observed in 48Ca induced reactions at Dubna to the known nuclides. The multi-nucleon transfer reactions will offer us unprecedented opportunities for the synthesis of new neutron-rich super-heavy isotopes, and the isotopes indicated by the filled circles in the lower right corner of Figure would be identified experimentally. If the reaction yields are sufficient, decay spectroscopy for these neutron-rich nuclides can be studied, and thus the information of the single particle states is obtained, which is essential to localize the center of the super-heavy stability island theoretically predicted. The neutron-rich isotopes are expected to be longer-lived, and they are ideal samples for study of chemical properties of the super-heavy elements. 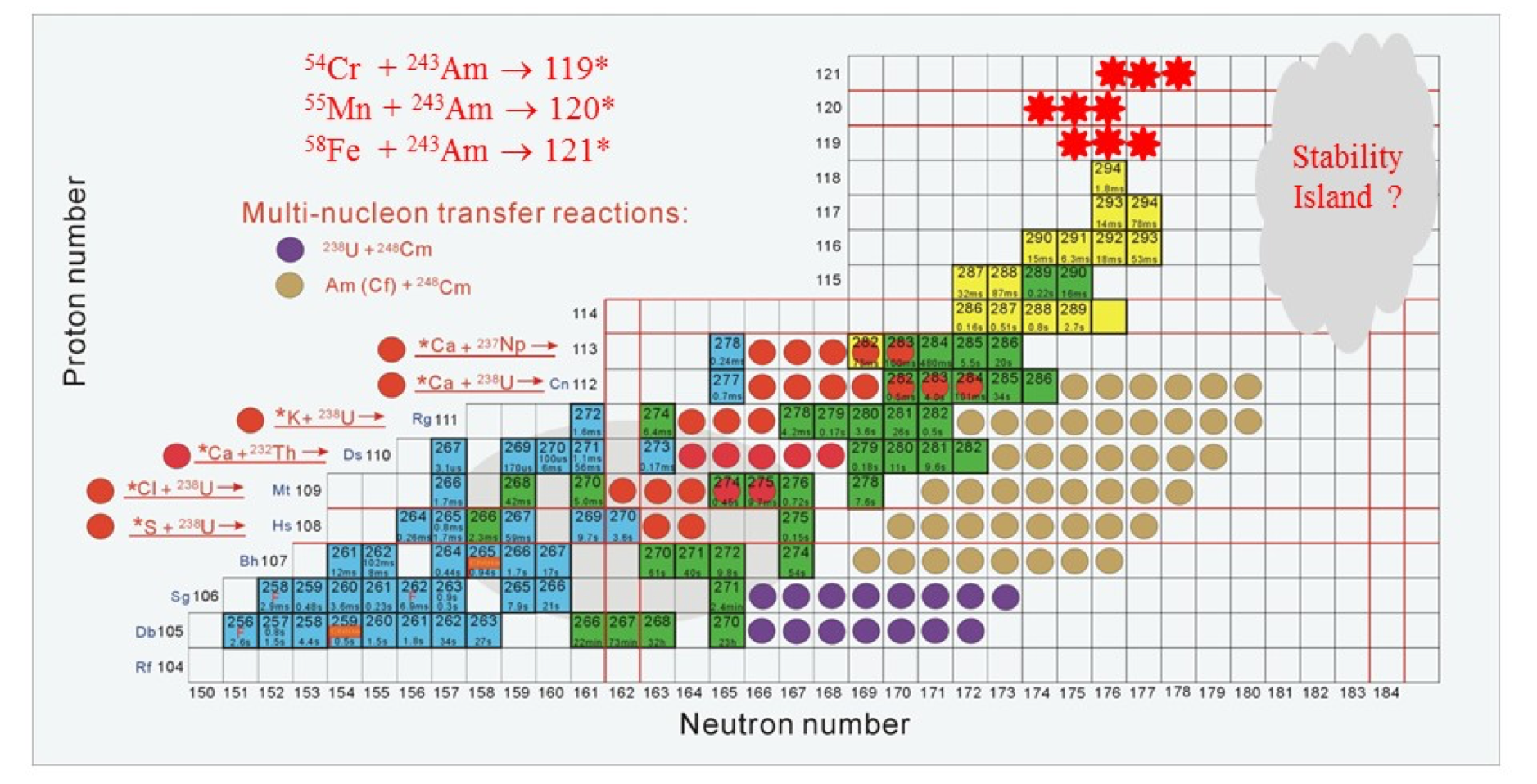 The physics goals in the super-heavy region. The shaded area shows schematically the island of the super-heavy stability predicted theoretically long time ago. The red stars are the new elements with atomic numbers of 119, 120 and 121, which could be produced using the reactions given in the top right corner. The filled circles with different colors indicate the nuclides produced by the corresponding reactions.