The next-generation radioactive beam line is a crucial facility to perform a large variety of modern nuclear physics experiments with outstanding discovery potential. The relevant researches include mainly production and identification of new isotopes located far away from the stability line, measurements of nuclear charge and matter distribution and radii, search for new exotic radioactivity modes and collective motions, recognizing the importance of tensor forces and high-momentum nucleons in nuclei, study of in-flight decays and continuum spectroscopy by nucleon and cluster emissions of drip-line nuclei, investigation on weak-interaction governed processes via nuclear charge-exchange reaction, study on the evolution of the single particle states and the magic numbers, and constraining the equation-of-state of cold asymmetric nuclear matter. We have surveyed the optimum experimental conditions for a batch of typical physics cases, such as the appropriate reactions to produce the exotic nuclides of interest and the required performance of the radioactive beam line including the angular acceptance, momentum acceptance, and momentum resolution. Based on the requirements from the physics program, we have designed the high-energy radioactive beam line named High Energy Fragment Separator (HFRS). In order to exploit the very intense primary beams, the HFRS is composed of a preliminary separator and a main separator. The major functional modes for the main separator are presented in the Figure

The major functional modes of the main separator. In the beam line, the sections in red and blue colors indicate the dipole and quadrupole magnet groups, respectively.

The exotic nuclides are produced via high-energy projectile fragmentations, in-flight fission of energetic heavy projectiles, and two-step reactions. The nuclides of interest will be separated in flight within several hundred nanoseconds and delivered to the detector systems. The HFRS is characterized with a long flight path of 180 m, maximum magnetic rigidity of 25 Tm, angular acceptance of ±30 mrad (x) and ±15 mrad (y), longitudinal momentum acceptance of±2.0 %, and momentum resolution of 700~1100. These challenging performance parameters are achieved with a multi-stage magnetic system, comprising intermediate degrader stations. Best-performance detectors are placed at the different focal and dispersive planes of the HFRS. Assuming reasonable detector performance of 20 ps time resolution, 0.2 mm position resolution, and 1.0 % energy resolution, the HFRS is able to achieve unambiguous event-by-event particle identification for all nuclear reaction products at high counting rates. The HFRS is the world-unique facility as compared to any yet existing or planned next-generation facility. Its peculiarities are:

·It has the maximum magnetic rigidity of 25 Tm and thus it can produce high-energy secondary beams with energy up to 2.9 GeV/u for A/Z=2 nuclides and 1.7 GeV/u for A/Z=3 nuclides.

·It has high primary-beam suppression power and high separation power of radioactive nuclides up to Z=92.

·It can provide fully stripped radioactive ions of all elements from hydrogen through uranium.

The physics research program based on the HFRS emerges from the experiments performed at the existing radioactive beam facilities worldwide. It will exploit the HFRS as flexible, high-resolution ion-optical device. A rich physics program is defined and shown in Figure. The major goals are to pin down the limits to nuclear existence particularly in the neutron rich regions, search for new forms of nuclear matter to appear far from the stability line, determine the ordering of quantum levels in nuclei far from the stability line, study the evolution of nuclear shapes along isotope chains, find new forms of collective motion in very neutron-rich nuclides, study dynamical symmetries in exotic nuclei particularly along the N=Z line, etc. Below, a few physics cases are given for demonstration of the importance.

The research objectives connected with nuclear structure and dynamics at the HFRS.

Measurements of total and charge changing cross sections: The thickness of neutron skins is one of the sensitive ways to constrain the equation of state of asymmetric nuclear matter, which is of utmost importance for understanding the neutron stars and their dynamic changes. On the other hand, the thickness of neutron skins gives the most direct evidence for the discovery of giant neutron halos including more than two neutrons predicted in extremely neutron-rich nuclides. Such exotic structures could reveal a new quest on the coupling of continuum and discrete states, and consequently prompt nuclear theories to understand bound and unbound objects from first principles. Neutron skin thicknesses can be determined by combining the matter radii extracted from the interaction cross sections and the charge radii mostly measured by laser spectroscopy methods. In case of nuclides for which charge radii are difficult to be measured by laser spectroscopy, a nuclear charge changing cross section provides a mean to determine the charge radius. A particular advantage of this method is that it can be applied for very short-lived nuclides using weak beam intensities, and thus has the possibility to reach the most neutron-rich isotopes. The HFRS is an ideal instrument in the world to perform measurements of the interaction cross sections and charge changing cross sections due to its high mass resolution and transmission. 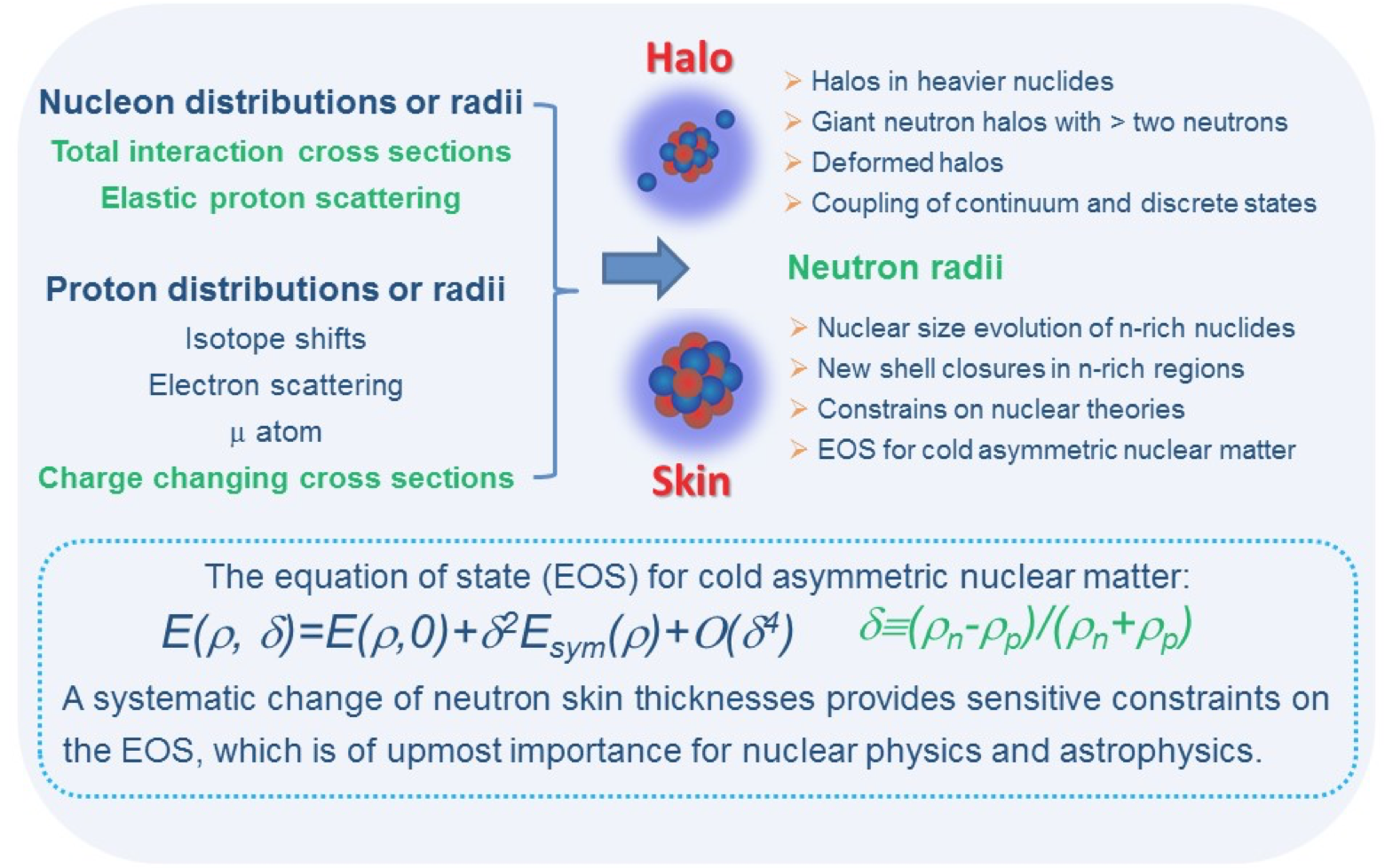 Based on the HFRS, we will measure systematically the total interaction cross sections and charge changing cross sections of unstable nuclides, and differential angular distribution of elastic proton scattering on unstable nuclides in inverse kinematics. The primary goal is to determine neutron skin thicknessesof nuclides in broad mass region, and the relevant physics are briefly indicated.

Elastic scattering experiments with an active target: The most accurate and detailed information on the nuclear matter distributions is obtained from high-energy proton elastic scattering measurement. This method can be extended to study exotic nuclei by measuring elastic differential cross sections in inverse kinematics using an active hydrogen target. Combining the proton-distribution radii determined by other methods, we can study the systematic change of neutron skin thicknesses along isotope chains. Additionally, the nuclear density near the maximum of r2r(r)is sensitive to the saturation density of nuclear matter, and therefore the N/Zratio dependence of the saturation density of nuclear matter can be studied from the systematic change of the nuclear density in a wide range of isotopes from the stability line to very neutron-rich nuclei. In such measurements, the low-energy recoil proton has to be detected in coincidence with the scattered residual nucleus in order to identify the reaction channel. The experiments will profit from the factthat the energy straggling of the scattered projectile in the active target is negligible at HIAF energies. Therefore, the excellent particle-identification power and momentum resolution of HFRS enable us to precisely measure the angular distribution in a broad angular region including the first diffraction minimum. The Figure shown in the right display the measurements and related physics.

Measurement of the momentum distribution of fragments: In order to understand the properties of nuclides far away from the stability, it is crucial to precisely locate the position of single particle states near the Fermi surface, and to investigate the degree to which their wave functions reflect pure single-particle motion. The momentum distributions of fragments following one- or two-nucleon removal was proven to be spectroscopic methods that give knowledge on the wave function of the nucleons in the initial nucleus. It is of great importance to extend these studies into higher-mass regions far away from the stability in order to probe whether the 50, 82, and 128 magic numbers still persist and whether new magic numbers will appear. The advantage of the method is that a very low intensity beam (~10/s) can be used for detailed spectroscopy. The experiments will benefit from the high-resolution momentum measurements by employing the dispersion-matching mode of the HFRS.

Search for the isoscalar neutron-proton pairing: It is well understood that the nucleon pairing gives rise to nuclear superfluidity, and the ground states of the even-even nuclei are very well described as superfluid condensates A unique feature of nuclei is that they are composed of two types of fermionic neutrons and protons, and consequently the nucleons can form four types of pairs like the Cooper pairs of electrons in superconductors, which are characterized by the quantum numbers of total spin (S) and isospin (T). Up to now, only are theS=0, T=1 isovector nnand pppairs definitely recognized. Whether there also exists S=1, T=0 isoscalar deuteron-like np pairing, a pairing mode excluded for identical particles according to the Pauli principle, remains still as a hotly debated open question. Due to the character of short-range paring nuclear force, the prerequisite to form nucleon pairs is that the constituent nucleons must occupy the same valence shell. This strongly limits the regimes in which strong nppairing might exist. In the chart of nuclides, only do the nuclides along the N=Zline fulfil this criterion, where it is most promising to look for the isoscalar nppairing effect. In the proton-rich nuclides approaching the heaviest bound N=Znucleus 100Sn, there are sufficient number of valence protons and neutrons occupying very similar orbitals. Nuclear theories have predicted that these valence nucleons would create coherently correlated states manifesting special effects of nppairing. Two-nucleon transfer reactions provides an ideal method to study correlations in the nuclear wave function. In particular, a powerful probe of the isoscalar nppairing in the ground states of heavyN»Z nuclei is to study deuteron transfer. This can be done using (3He, p) reactions. The nuclei of interest are produced from projectile fragmentations, and then the resulting proton-rich beam impinges on a 3He gas cell. We will measure the ΔI=0 transfer probability between the 0+ground state in even-even N=Znuclei and 1+states in neighboring odd-odd nuclei, and the existence of isoscalar pairing correlations could be manifested with a collective enhancement of the deuteron transfer. In addition, the T=0 and T=1 npcorrelation, if existing and strong enough, could lead to an a-type clustering comprising two np pairs, i.e. a quartetting rather than a pairing effect, which brings about an extra binding energy in N=Z nuclei. 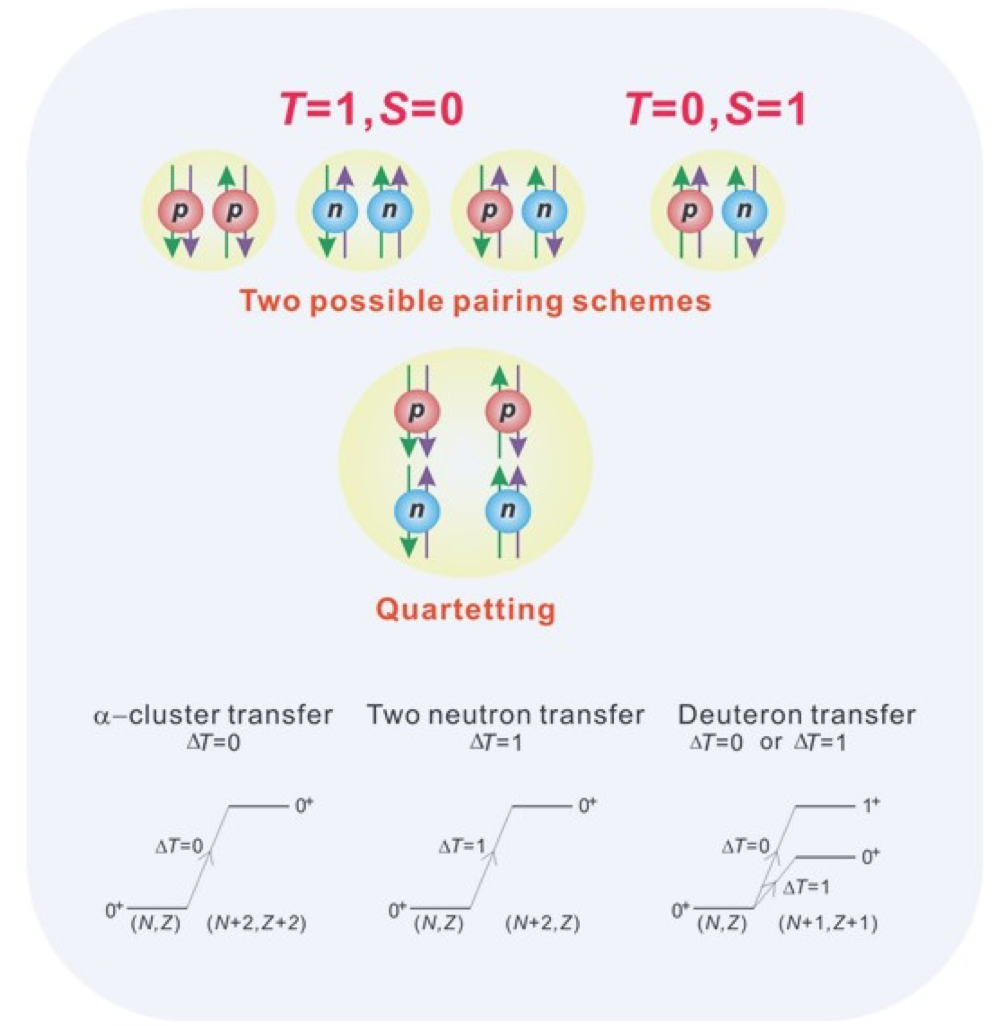 The possible nucleon paring schemes. In the T=1 isoscalar pair, the spins of the nucleons are parallel while in the T=0 isovector pair they are anti-parallel. A well-established method to recognize the existence of isovector pairing correlations between identical nucleons is to measure collective enhancements of two-neutron or two-proton transfer. Similarly, the existence of isoscalar pairing correlations in N=Z nuclei would be manifested with a collective enhancement of the deuteron transfer.

Last but not least, the HFRS has the highest magnetic rigidity up to 25 Tm as compared with any existing or planned radioactive beam facilities in the envisaged future. This feature reinforces the HFRS with a large discovery potential, and unique experiments are in consideration, which were never possible in the past and will not be possible by other lower-energy facilities. The research program exploring fully the high magnetic rigidity includes synthesis of very neutron rich hypernuclei, nucleon excitations inside unstable nuclei along isotope chains, new giant resonance of neutron rich nuclei, and spectroscopy of exotic meson-nucleus bound system. For these experiments, dedicated detector setups are built and coupled to the specific focal planes of the HFRS. Here, we take the Δ-resonances in nuclear medium as an example to demonstrate the physics importance. In heavy-ion collisions at relativistic energies, particularly in charge-exchange reactions, there is clear evidence for Δ-resonances in nuclei, providing unique possibilities to study baryon resonances in nuclear medium. The Δ-resonance is a spin- and isospin-flip intrinsic excitation of the nucleon, and its fundamentality in nuclear structure is that the three-body force in nuclear systems could originate from Δ-resonances. Hitherto, Δ-resonances in nuclei have been studied exclusively in stable or near stable nuclei. The HFRS enables us to study Δ-resonance in nuclear medium over long isotope chains from the stability to approaching the drip-lines. The systematic research could shed light on the questions of crucial importance: Are the masses and lifetimes of Δ-resonances modified in nuclear medium? How deep is the Δ-nucleus potential? What is the isospin dependence of the resonance potentials?