High-energy stable beams extracted slowly from the Booster Ring are delivered to the high-energy experimental cave. The 9.3 GeV proton beam and A/Z=2 primary beams up to 4.25 GeV/u energy will be available. We have defined the hypernuclear physics and properties of nuclear matter as our high priority research program at the high-energy station.

It has been proven that

hyperons can be produced in peripheral nuclear collisions at incident energies of 1.0~2.0 GeV/u, and the

hyperons may coalesce with the projectile fragments and hence hypernuclei are synthesized. It is expected that the

interacts with a proton in the hot participant zone, resulting in production of two Lhyperons. If the two

hyperons are captured by the fragments, hypernuclei with double strangeness are produced. 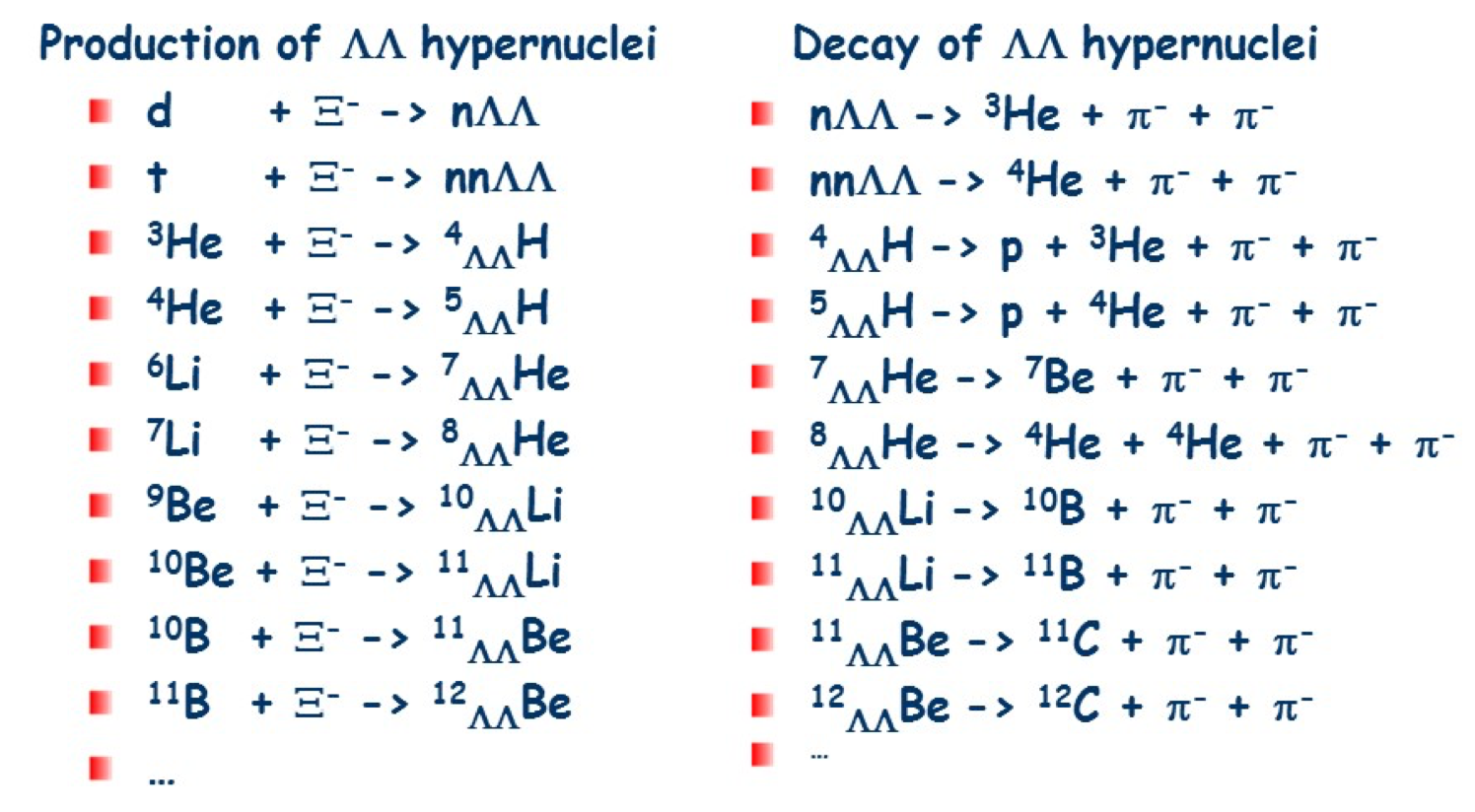 In collaboration with GSI and RIKEN, we designed the experimental setup for hypernuclear physics research, which is located in the high-energy cave of HIAF. We hope that HIAF would be the world’s best place for such studies, and a dramatic expansion of the hypernuclear chart is expected. 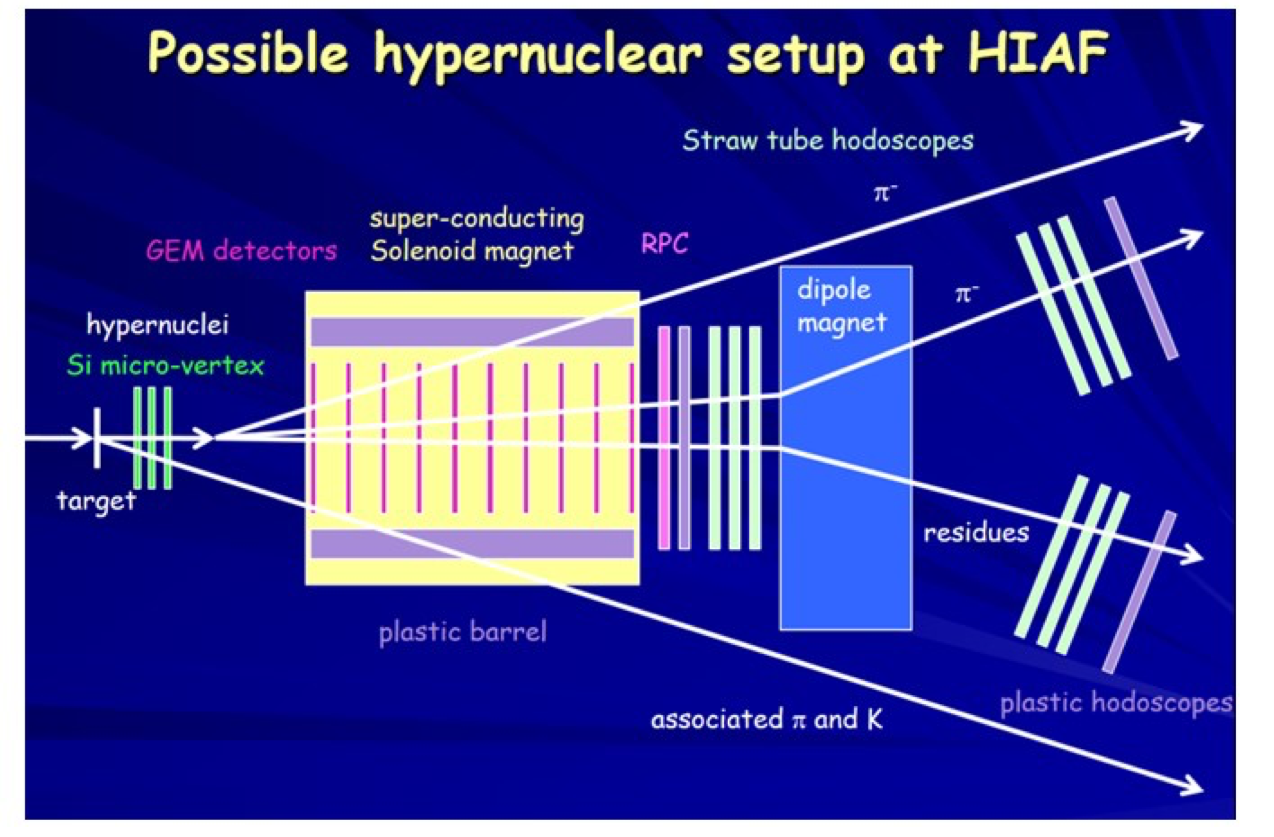 The experimental setup for study of hypernuclei at relativistic energies at HIAF. The major detectors are indicated.

The properties of nuclear matter, described by the theory of the Quantum Chromodynamics (QCD), can be summarized in a phase diagram just like any other form of matter. It is of utmost importance to find how the nature of nuclear matter changes as we vary the temperature and baryon density. Lattice QCD calculation predicted that the transition from the quark-gluon plasma (QGP) to the hadronic phase is a smooth cross-over at the vanishing baryochemical potential ofµB~0, while at the finite chemical potential the phase transition is of the first-order. Thermodynamically, hence, there must exist a critical point, i.e. the end point of the first-order phase transition line, see the right Figure shown below. The critical point would be a milestone in the QCD phase diagram and is the Holy Grail for the field of the heavy-ion collisions at relativistic energies. During 2010-2017, a beam energy scan was carried out in order to search for the critical point. Interesting non-monotonic behaviors as a function of collision energy have been observed in the net-proton fluctuation and net-baryon first order collectivity, implying the expected criticality and softening of the equation of state, respectively. Both of the observations occur at the low energy end of the beam energy scan at RHIC. HIAF extends the coverage of the baryochemical potential to lower energy. The beam energy scan program would be incomplete without the results from the energy region at HIAF. In heavy ion collisions at relativistic energies at HIAF, the peak nucleon density can reach 2-3times of the saturation density, where is an ideal place for studying symmetry energy in order to constrain the equation of state of asymmetric nuclear matter at high density. We will build a detector system dedicated to study the QCD phase structure and symmetry energy using various physical observables, as shown below.

Shown in the right is the sketch of the QCD phase diagram in temperature T as a function of the baryochemical potential µB. At LHC/RHIC high energy region, a smooth cross-over at µB~ 0 is expected. At the lower energy region, the phase transition occurs by passing the first-order phase boundary. The QCD critical point, if exists, should be within this region. The left figure presents the experimental setup for study of heavy-ion collisions at relativistic energies at HIAF, and the major detectors are indicated.