The High Intensity Heavy-ion Accelerator Facility (HIAF) will be a scientific user facility open to researchers from all over the world. HIAF will be one of the world’s leading heavy-ion accelerator complexes in the envisaged future that enables scientists with concerted effort to explore the hitherto unknown territories in nuclear chart, to approach the experimental limits, to open new domains of physics researches in experiments, and to develop new ideas and heavy-ion applications beneficial to society.

HIAF is located in Huizhou City of Guangdong Province in south China. HIAF is funded jointly by the National Development and Reform Commission of China, Guangdong Province, and Huizhou City. The total investment is about 2.5 billion in Chinese Yuan, including about 1.5 billion Yuan from the central government for facility construction and 1.0 billion Yuan from the local governments for infrastructure. The construction is scheduled for seven years, and the commissioning is planned in 2025.

HIAF is a completely new facility, and it will be built on a primordial place without any existing infrastructure. The location of HIAF is about 2000 kilometers away from the Institute of Modern Physics charged to be responsible for the construction. In order to facilitate the project management and control reasonably the travelling expenses, a branch of the Institute of Modern Physics is under construction in Huizhou City, and it will be in service in 2020. The engineering team will gradually move to there from the institute, and a new research center of heavy-ion science and technology will come to the stage as scheduled.

An architectural rendering shows the HIAF complex and the China Imitative Accelerator Driven System siting on the same campus. 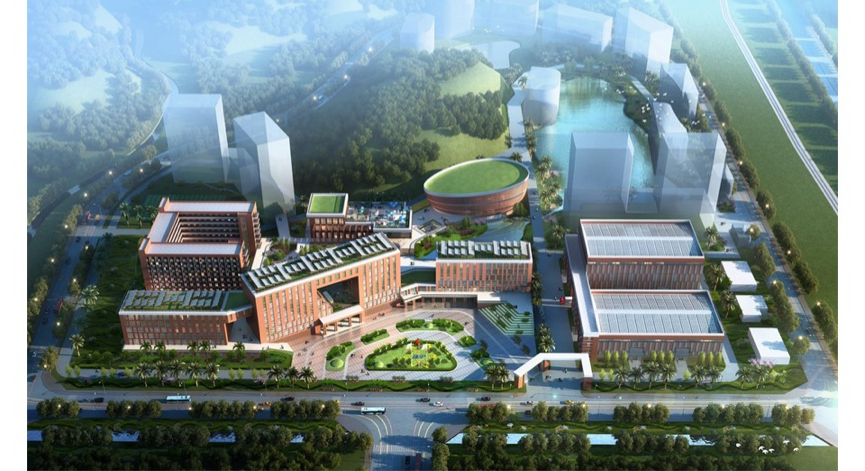 A panorama of the branch of the Institute of Modern Physics, located about 5 kilometers away from the downtown of the Huizhou City.

The primary aim of Nuclear Physics is striving to understand the origin, structure, evolution, and phases of strongly interacting matter, which constitutes nearly 100% of the visible matter in the Universe.

In essence, HIAF is a next-generation storage-ring based heavy-ion research facility. It builds upon the expertise and achievements of the Heavy-ion Research Facility in Lanzhou (HIRFL), an nationaluser facility......

Design and construction of HIAF provides outstanding opportunities to train and grow up next generation of accelerator scientists and engineers to fulfill critical workforce needs in design and engineering of large......